Home / Brands / Meriwether
Makers of Wit and Sarcasm.
Meriwether was spawned in 2011 on the mean streets of Whitefish, Montana. It's a tough life over here -with the beautiful scenery, amazing skiing, world-class fishing and basically no people. Also, the tallest building in town is the brewery.

We are probably the best company in the world.
On most days we just sit around in our black turtlenecks smoking our pipes. In between smokes, we think up with funny stuff. Most of it pointless and unnecessary. Basically, we design things that aren't really necessary and sell them to people who don't really want them... and we're damn good at it.
Get a job hippie.
After spending years as professional (never actually sponsored) skiers, Danny B. and his beautiful bride Barbie Pancakes decided it was time to settle down and make some fat stacks of cash. Some Harvard dropout stole our idea for a massive social media network so Meriwether was our backup plan.

We will constantly amaze you... but not in a good way.
Now we design unique, one of a kind gifts and lifestyle goods. We love well-crafted objects and are drawn to the nostalgic, the whimsical and of course, the sarcastic. Deep down we possess a deep yearning for the Good Ol' Days and desperately wish we could go back. The year 1976 would be perfect... or maybe 1983, because Atari was at its peak and that's the year Eye of the Tiger was released. (which is basically the greatest song ever written.)

This journal is an original Meriwether design not available anywhere else. Designed and shipped from our studio in Whitefish, Montana.
Meriwether Journal
$15.00 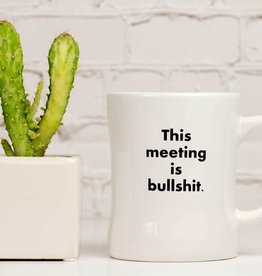 This elegant and well-designed mug
Meriwether Mug
$16.00
By using our website, you agree to the use of cookies. These cookies help us understand how customers arrive at and use our site and help us make improvements. Hide this message More on cookies »